<<Back to Book of Characters 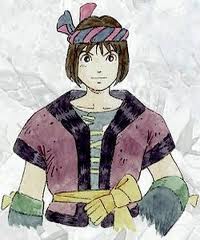 Levant is the protagonist of Jade Cocoon: Story Of The Tamamayu and is also an important character in Jade Cocoon 2.

Levant was born to a Cocoon Master, Riketz and Phio, a Nagi Maiden in Syrus, a small village in Parel.

He is a boy who is coming of age to become a Cocoon Master. Levant's Father, Riketz, disappeared when he was a young and thus, Levant was raised by his mother, Phio. He has a very hard time forgiving his father for abandoning him and his Mother long ago. Levant marries a young Nagi Maiden, Mahbu, early in the game.

His name can be changed in the very beginning of the game and again after the game.

Attack: 20
Defense: 23
Magic Attack: 20
Magic Defense: 23
Speed: 20
He also starts with 100 Health points. This maximum can be raised using Great Walnuts. His other base stats can not be changed. However, Equipment changes his final stats and probably the in-code level of his attacks (not to be confused with his Capture Level, which increases his chance to capture minions)

Levant is the central (though silent) character of Jade Cocoon: Story Of The Tamamayu. He becomes the Cocoon Master of Syrus Village in the beginning. He is also the son of Riketz, the former Cocoon Master of the Village.