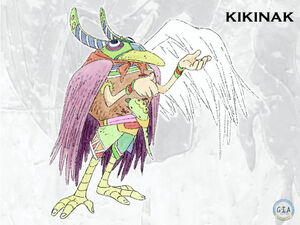 Kikinak is the guardian spirit of the Dragonfly forest. He is also known as "The Bird-Man".

Originally, Kikinak had been one of the helpers of the forest god Elrim, having previously been a divine spirit by the name of Amos. However, Amos committed the sin of lust, and Elrim, enraged, transformed him into a bird man as punishment, demoting him to keeper of the Dragonfly forest.

During the course of the game, the player must seek out Kikinak in order to find out information about the Calabas herb.

Once met by the player, Kikinak will eagerly insist that you do battle, and, should the player win, will take great amusement in the player's strength as a Cocoon Master, thus earning Kikinak's respect and friendship. After the battle, Kikinak will give the player several items, including a satchel of Calabas powder and an ocarina as a symbol of friendship. If the player returns later in the game to the spot where Kikinak was first met and uses the ocarina, Kikinak will appear to spar with you and provide more information about various subjects. The player may do this as many times as desired.

Kikinak is vain and conceited, considering himself something of a celebrity for being the fabled forest guardian. He is quarrelsome and thinks with his fists, and generally can only respect someone of great strength, usually those who surpass him in fighting ability.

He appears somewhat simple, able only to appreciate the value of physical power, claiming that the notion of willpower or emotional strength confuses him. As such, he deems "the power of man" too complicated for his tastes.

In spite of this, Kikinak is actually exceptionally friendly and eager to help those who call on him. He seems to take pride in knowing a lot of people, as well as knowing a great deal about people, and is usually eager to gossip to Levant or others about whatever he may know. He seems to consider practically everyone he knows to be his "friend" and usually speaks positively of most people he knows, giving him a rather charming, easy-going, sociable air.

Although guardian spirits are thought to be malicious or dangerous by the people of Syrus, Kikinak seems to be more or less trustworthy, and has been known to befriend other humans like Levant who win his admiration by defeating him in battle.

Kikinak appears as a tall, gangly, male humanoid with the upper body of man, the lower body of a bird, and the head of a parrot. Although Kikinak has humanoid arms and hands, he also sports large, purple, feathery wings on his back. When folded, the wings drape around his sides like a cloak. His legs are like a bird's, thin and long with orange flesh, with talons on the toes which he uses to attack. Kikinak's head is peculiar, looking more like a ritual mask than a real face. It is somewhat flat and green with large, spherical, bulging eyes sitting more towards the top than the front, with a long, flat, yellow beak. His head has several adornments, including two curved, striped horns jutting out of the back that curl upwards.

Kikinak's clothing is typical Jade Cocoon-style tribal regalia, consisting of a brown tunic with a green kilt decorated around the edges with a triangular pattern, as well as a red belt around his waist on which he carries items. He wears a red bandanna around his neck, tied in the front. Around his wrists are two red and green striped bracelets.

Appearance in the Story

Kikinak is the Bird Man and area boss of the Dragonfly Forest. For in-depth character information, see Kikinak. He will drop a Great Walnut with a 64% chance - this, combined with his ability to be infinitely re-summoned with the Ocarina prior to the Act of Gehena makes him a great farming spot for those with the patience.

Hints on defeating this boss

Fire attacks, no matter whether special attacks or spells, are a hazard to Kikinak.

Uses an uppercut Attack and two other attacks which are special attacks and classified as standard attacks. Each of these three abilities has an efficiency of 130 % (increased to 140 % due to his hidden increased special attack efficiency trait). 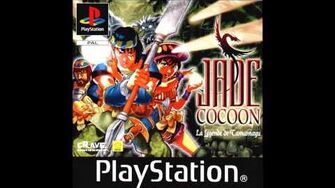 Kikinak has his own theme in the game named Birdman Kikinak.

His appearance might be based on the Japanese Tengu.