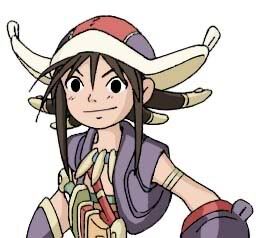 A "boy of today" who admires the Cocoon Masters

Kahu is a male character from Jade Cocoon 2 and serves as the protagonist. He is an only Son of a carpenter living in a small village nestled in a ravine north-west of the Forest of Parel. Brought in by a BeastHunter want ad, he came to visit the Temple Of Kemuel, a Nagi holy place protected by the "Legendary Cocoon Master" Levant. Kahu is somewhat obsessed with becoming a Cocoon Master, only to find out that their time has now past. However, he is told that BeastHunters are now in their place (being called a "Super Hyper Cocoon Master) and is instructed by many of the local BeastHunters and temple residents, such as Ra, Mu and Kikinak and eventually, Levant himself to train to become a BeastHunter.

When finishing his initial exploration of the Training Forests, during his attempt to receive a BeastHunter license, Kahu encounters a Cocoon. Enclosed in this Cocoon is Nico, a Fairy (or Faerlu) from the Dream World, who inadvertently curses Kahu, causing him to grow a tail. This tail is actually a Kalma, parasitic insects that can infect and have effected the Divine Beasts of the Wormhole Forests and humans. Thus, begins his quest to be rid of his curse, which he is informed by Levant will eventually kill him if it remains. The tragedy that befalls him in his last test to become a fullly-fledged BeastHunter and receiving his License is no more than the start of the fate awaiting him.

Nico follows and aids Kahu during the game and they eventually become great companions, though ones who argue and bicker constantly.